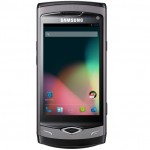 The Bada-droid project for the Samsung Wave series of devices has been brewing in the background for quite some time. It is nowhere near as public as some of the other ports for other devices simply because the Wave is not such a popular device and also because of its overall unavailability in several parts of the world (at least through official channels). For those who did make the jump to the Bada (soon to be Tizen) and are regretting it, it is a relief to see some development focused on porting other operating systems to the devices.

In the case of the Wave S8500, the device has been steadily receiving ports from some very dedicated devs. The latest installment, which was brought to you by XDA Forum Member Tigrouzen, is an unofficial build of the infamous AOKP ROM series. This ROM is fully featured, with several things working right off the bat. While not exactly a good comparison due mainly to hardware difference, the developer posted a Quadrant screenshot that compared favorably with other devices. However, members are reporting that several things are not working right as of yet, such as the radio which enables the device to make calls, send SMS, and a few other things that you normally like to do with a phone. This ROM is installed on the SD card, which means that the data and system are stored in there as well. The dev has been able to get about 500 MB of storage, which is enough for most mild Android users.

Please test the build and leave some feedback (and logcats… lots of logcats) so that the dev can try to figure out what the present bugs are, and most importantly, how to fix them.

You can find more information in the original thread.

Want something published in the Portal? Contact any News Writer.

Imagine how cool a Google Now smart watch would be