MicroFire Tool Shows that Even Obscure Devices Can Be Loved 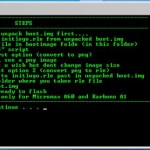 When most users think of Android phones, the Micromax A60 and Karbonn A1 are probably not the devices that come to mind. In fact, most users (especially those in the United States) don’t realize that countries like India (where these devices hail from) have a massive selection of Android devices to choose from. However despite the prevalence of these devices, aftermarket development is often lacking.

XDA Senior Member Akash Akya is hoping to change this with the release of his latest tool, MicroFire tool. Designed to assist in development for the above two devices (and more in the future), so far the application has:

While the application is only for Windows, it can make itself handy for those looking to modify their boot logo or create an update.zip easily. The developer is also looking for users of other devices to send copies of their boot.img so that he can add support for them as well. So what are you waiting on? Head on over to the original thread and give this a spin.

T-Mobile to adjust insurance rates for handset in 2013