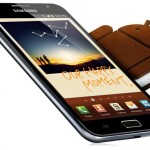 In most cases, getting an upgrade to a new version of Android is exciting. It usually ushers in numerous bug fixes, performance enhancements, new UI elements, and a whole new experience with the device than what people are used to. That said, sometimes it can be a real pain when a new version of Android comes out because a number of bad things can happen. For starters, you may loose root, along with the exploit used to acquire root. Secondly, the new version of Android may be a little buggier than you would like. This is why there are downgrade guides—so users can get back to an older version for whatever reason.

This is the case for the International Galaxy Note, as users who installed the LPY ICS update or received their phone with the update preinstalled cannot simply flash back to Gingerbread if they so choose. This would be a serious problem if there were nothing they could do, but luckily there is. XDA Senior Member thehackersz has released a tutorial to downgrade users from LPY Ice Cream Sandwich back down to Gingerbread safely. The guide is easy to follow, as it simply involves flashing a number of things over ODIN and a custom recovery. Do pay attention to the order though, as flashing in the wrong order can be detrimental to the health of your Note.

There is, however, one thing to take into consideration. Some users have reported that using PC ODIN to flash has bricked their phones and that XDA Elite Recognized Developer Chainfire‘s Mobile ODIN is the way to go. Of course, there are also users who’ve bricked their phones using Mobile ODIN, and recommend the PC version. So be warned that there could be serious risk when attempting this method as, you may brick your device if you’re not careful.

For additional information, make sure to visit the original thread.

HTC will follow M7 with M4 and G2, rumor suggests

Extend Your HelloWorld App with a Toast Message